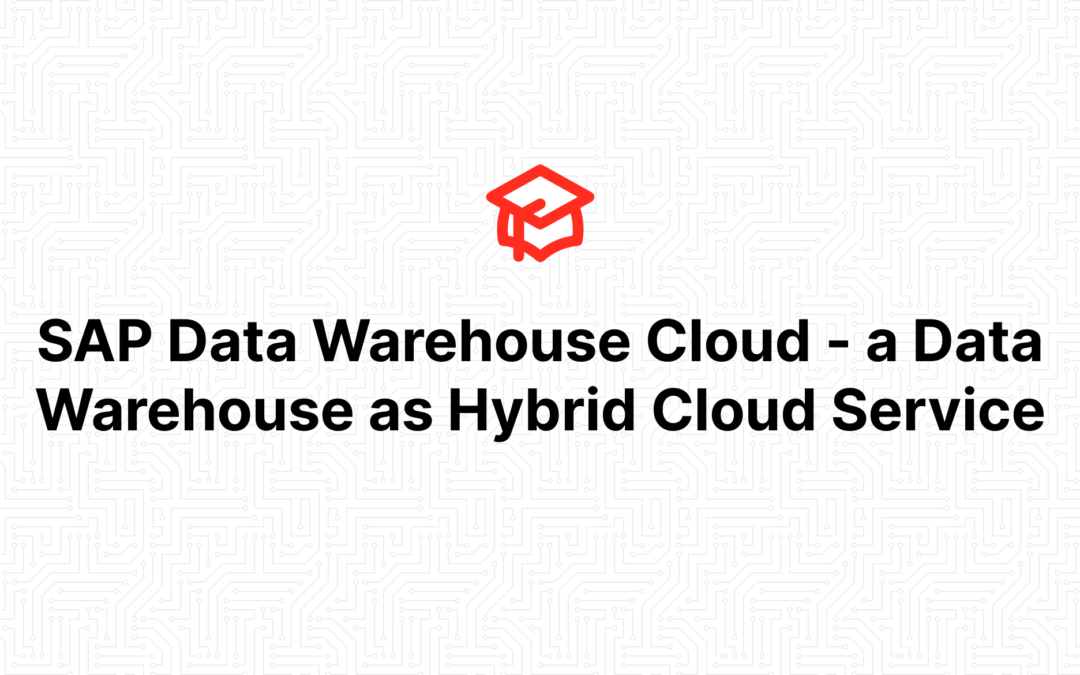 SAP continues to focus on the cloud business, cleverly addressing the technical restrictions of large ERP systems and the rejection of business customers.

Like most competitors in the IT industry, SAP sees its future in the cloud, as does that of its in-memory database platform HANA. The accelerated migration of business processes to the cloud has been driven mainly in recent years by the desire to reduce costs, improve agility, increase efficiency, and exit the responsible infrastructure management business. At the same time, modern technologies such as machine learning or big data analytics need to be tested faster than prototypes or taken directly into productive use. Recently, the historical reluctance to move business-critical applications or sensitive data about security, compliance and strategy/management concerns into the cloud seems to be easing.

However, SAP’s history around the HANA platform and its cloud ambitions has become much more exciting in recent months, largely due to a company-wide restructuring program. The company presented the program at the beginning of the year and announced that it would cut a total of 4,400 jobs. Over the last few months, the impact of these cuts has become increasingly evident as they have affected executives involved in both the HANA platform and the cloud. These included names such as Ken Tsai, whose marketing activities included SAP HANA, and HANA developers Thomas Jung and Rich Heilman. There were also cloud-focused executives who left, such as Robert Enslin, an SAP veteran who was happily accepted by the Google Cloud team just weeks after his departure.

SAP consistently builds its cloud services on SAP HANA
Despite all internal changes and restructuring, the path is clearly towards the cloud. SAP HANA and the cloud played a prominent role in the recent SAPPHIRE Now. The focus here is on SAP HANA Cloud Services, in which SAP now makes its platform available as a service in several public clouds. Starting with Amazon Web Services (AWS) up to the Google Cloud Platform, all common cloud infrastructure providers are used. As with any as-a-service offering, this approach means eliminating a large portion of the administrative burden for the in-memory database and transferring it to SAP or the infrastructure providers.
Key components of SAP’s Cloud Data Services strategy include

In addition to the pure database as a service offer, SAP presented the Data Warehouse Cloud – the first service of the announced HANA Cloud Services. In the beta phase, the service will provide companies with a consolidated view of all analytical, transactional and „large“ data sources. The SAP Data Warehouse Cloud is a new data warehouse solution that enables companies to leverage all the advanced features of SAP HANA without the massive up-front costs often associated with data warehouse implementations. You can start with a small environment that can be scaled in size as needed. The SAP Data Warehouse Cloud has a variety of connectors that simplify access to data anywhere and enable smooth integration with all types of on-premise systems (both SAP and third-party).
Data Intelligence is an extension of the existing HANA Data Services and prepares unstructured data from non-HANA databases for use in other applications, including and especially for the SAP Analytics Cloud. Data Intelligence, which will be introduced in the coming months, will leverage the offerings of the SAP Data Hub and SAP’s IoT portfolio „Leonardo“ to help companies implement machine learning models.
The SAP Data Warehouse Cloud service is still in the beta phase, which is known from the offer so far:

SAP is thus consistently continuing along the path of the hybrid cloud, which it first hinted at with the SAP Analytics Cloud. Here, too, the large amounts of data that accumulate in long-running SAP ERP installations and are simultaneously classified as sensitive remain on the company’s own server and only the possibilities offered by SAP HANA are exploited. This has already been clearly drilled out with the cloud data warehouse, which really loads data from third-party sources. With the Analytics Cloud it looked at first glance as if all workloads were executed on the local HANA instances and only the results were displayed in a nice user interface in the cloud.

The SAP HANA Data Warehouse Cloud addresses the issues of elasticity and scalability with a new concept called „Spaces“. Spaces make it possible to scale individual areas of the data warehouse or data mart independently of each other instead of having to build huge monolithic systems. The functionality integrated in the HANA core enables the SAP Data Warehouse Cloud to intelligently replicate data to the specific storage space where it is needed instead of merging all data. Combined with flexibly and independently rentable spaces, allocation allows you to control how much computing and storage capacity a defined set of users, typically a single business unit, can consume.
The concept of spaces enables an architecture in which defined user groups can consume and extend trusted data without having to replicate the data beforehand. Quota assignments act as a kind of gatekeeper for each user group. It also ensures a durable, mature data mart solution that end users do not need to have the knowledge or time to set up the technical infrastructure required to operate such an architecture.

As with any cloud offering, the SAP Data Warehouse Cloud does not require companies to provide resources for the setup and operation of an SAP HANA database platform or data warehouse. Operating such a system in a traditional large enterprise system also requires a team of qualified IT experts dedicated to securing enterprise data, providing consistent and reliable data, ensuring data availability around the clock, and more. With the SAP Data Warehouse Cloud, the company can focus on creating value from the data and not on these operational tasks. With the SAP Data Warehouse Cloud, SAP is able to offer all the benefits of other cloud-based software-as-a-service solutions, but is also able to address its target group of large enterprise customers. For technical reasons (excessive data volumes and latency problems), they cannot switch completely to the cloud, but are now open to the use of cloud offerings. At the same time, SAP HANA has created a platform that perfectly integrates local on-premise systems and cloud services: the large amounts of data remain on-site and seamlessly integrated with the cloud via SAP HANA’s native mechanisms.

We use cookies on our website to give you the most relevant experience by remembering your preferences and repeat visits. By clicking “Accept”, you consent to the use of ALL the cookies.
Cookie settingsACCEPT
Manage consent

This website uses cookies to improve your experience while you navigate through the website. Out of these, the cookies that are categorized as necessary are stored on your browser as they are essential for the working of basic functionalities of the website. We also use third-party cookies that help us analyze and understand how you use this website. These cookies will be stored in your browser only with your consent. You also have the option to opt-out of these cookies. But opting out of some of these cookies may affect your browsing experience.
Necessary immer aktiv
Necessary cookies are absolutely essential for the website to function properly. These cookies ensure basic functionalities and security features of the website, anonymously.
Functional
Functional cookies help to perform certain functionalities like sharing the content of the website on social media platforms, collect feedbacks, and other third-party features.
Performance
Performance cookies are used to understand and analyze the key performance indexes of the website which helps in delivering a better user experience for the visitors.
Analytics
Analytical cookies are used to understand how visitors interact with the website. These cookies help provide information on metrics the number of visitors, bounce rate, traffic source, etc.
Advertisement
Advertisement cookies are used to provide visitors with relevant ads and marketing campaigns. These cookies track visitors across websites and collect information to provide customized ads.
Others
Other uncategorized cookies are those that are being analyzed and have not been classified into a category as yet.
SPEICHERN & AKZEPTIEREN
Unterstützt von